We are so excited that 18 year old Yate athlete Owen Merrett has been selected to compete at the U20 World Championships!

Owen will be one of only 43 athletes (and only 9 field athletes) who will make up the GB team at this event, which takes place in Cali, Columbia at the beginning of August.

Owen’s event is Hammer and he has worked so hard this season to reach the tough qualifying standards set by UK Athletics, and we’re so proud of him, and coach Matt Spicer for this achievement.

Owen will go up against the best junior hammer throwers IN THE WORLD on 2nd August for the qualifying rounds, with the final on the 4th August.

We anticipate there will be a YouTube live stream on @WorldAthletics.

We must also take this time to point out just how close Luke Ball also came to qualifying for the same championships.

Having already improved his PB to 2.12m in the High Jump earlier in the season, Luke attempted the championship qualifying standard of 2.16m at both the English Schools and England Athletics Championships.  On both occasions he only narrowly missed out.

Surely, both Luke and Owen stand a very good chance of qualifying for the U20 European Championships in Romania next year? 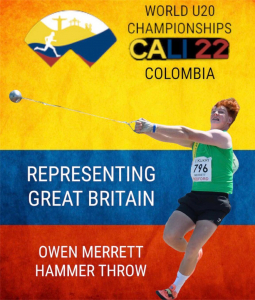 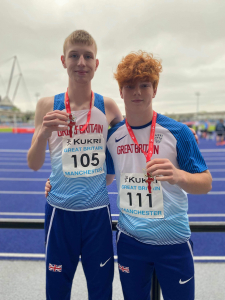