Following last weekends LAG YDL we have just had another busy weekend for our athletes, with Sofie Anderson, Jack Moore & Abi Robson at Yeovil for the Combined Events County Championships, and our UAG members representing Team Avon in the YDL match on Sunday, I noticed a PB by Lexi Bond in the triple jump. Well done to all our Club members.

On another note, after seeing some of our athletes being selected for County & Country, it is great to see our coaches getting in on the act!

Mark Lodge has been selected as part of the GB coaching team for the CPISRA World Games this August, it is great to see his effort and commitment being recognised and this follows his selection as throws coach at the Invictus games & award of ‘Professional coach of the year’  from South Gloucestershire Council last year. Well done Mark, we will expect photos and a report please! 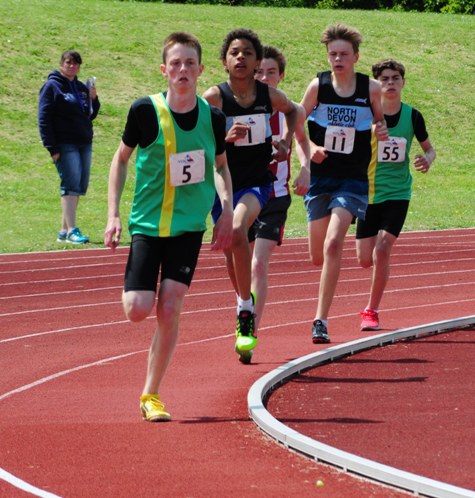 I think I’ve said before that the South West Schools Championships is the biggest meeting that many of we officials go to. With teams from the seven south west counties the days starts early and ends late and it’s all go in between. To make up for that the Exeter stadium always lays on a pretty spectacular buffet for officials to graze on through the day. I’m particularly fond of the little curried pasties!I was a marksman this year. Until you’ve done it it’s hard to appreciate just how much walking around there is. Chief marksman, Kieron, is an old friend and working with him is a pleasure. But by the time Lesley and I were getting our evening meal from Uncle Wong’s in Yate both of us were about out on our feet.How did Avon athletes do? Well, a kind of pattern emerged. Three of our middle distance runners fell. Aidan Noble started it rolling, tripping in the 1500m, finishing the race but well short of what he could reasonably have hoped to do. Two others fell within feet of winning their races. One girl managing to practically crawl across the line for a silver medal. The boy – possibly the most exciting find of the day – going down within sight of a really fast time.Tyler Moulton won his hammer event for the second year running and the rest of Matt Spicer’s & Paul Thorne’s hammer group also acquitting themselves very well.

Lesley has sweated blood over this meeting, because this year she has found herself doing it all on her own. I wrote last week how our dining table is event HQ for Avon Schools and this year there was a YDL match the following day, which also had its own corner of the table.

It would have been nice to report that Yate won their home match, but that proved too difficult. This time it was boy hurdlers who fell. (What is going on????!!!) Daniel Brooks and Jack Holbrook looked impressive from my vantage point at the top of the timekeepers stand.

My call for volunteers, initially to run the results programme, resulted in eight people coming forward to help. So I must express my gratitude to all of them for playing a key part in making sure that the day ran smoothly. In particular I must than Sophie Reed and Georgia Taylor who operated the computer so that results could be published. In record time, I understand.

All in all, a very pleasant day’s athletics, though very windy. Lesley now as the English Schools team to sort out and administer. But an end is in sight. Sixteen days before we set off for France to watch the daughter compete in Geneva. Have I told you about that? You must be one of the very few!!!

Massive shout out to all the Dads who have given up their Father’s Day to help our Yate Athletes compete. Happy Father’s Day to you all!! Hope you all have a Fantastic Day!

The  Westbury Wipeout is a challenging multi terrain adventure run for juniors age 8 to 15, taking them on a tour of the woods, streams and hills of the Blaise Castle Estate. The event is 3k long (2k for 8 and 9 year-olds), and includes a long downhill section, some scrambling up banks and slopes, and plenty of splashing through water and across mud, rocks, roots and steps. The course is only lightly marked. Survivors will have to overcome the ‘Decent of Doom’, ‘Shark Lagoon’, ‘Ditch of Destruction’, ‘Crocs Leap’, ‘Hills of Torment’, ‘Trolls Bridge’ and ‘Scramble of Hope’….. See Survivors ‘Route Map’ inside for location of challenges.

As a fun run, the event will not be timed. The emphasis is on adventure, challenge and fun. Participants are advised that, once they start, the only way out is on their own two feet ! All participants will receive a T shirt printed especially for the event.  Please read the ‘Instructions for Participants’ and ‘Be Water Aware’ health advice card before entering the event.

Run registration / assembly point – Westbury Harriers’ club house (adjacent to the main car park and playground) at Blaise Castle. Warm up starts at 7:15pm. The run starts at 7:30pm. Please arrive in plenty of time to be able to register and warm up.

Under UK Athletics Rules, Licence No. Subject to Permit. Minimum age 8. Maximum age 15. Due to the nature of the terrain, the event is unsuitable for wheelchair users.

Welcome to Blaise Castle for the Westbury Wipeout.

We hope you have a great run.

Just a reminder the Bristol and West open is on tonight, (enter on the night). This is a great opportunity to register a height , time or distance at your event(s) you would like to compete at. Our Team Mangers use these and other performances to select teams, so if you do not have a registered performance on Power of 10, or feel your current personal best is not representative of your capabilities then now is the time to change it!

Check on Bristol and West website that your event(s) are on tonight and at what time and register in time, this is particularly important for new under 13 and under 15 athletes to show what they can do, so give it a go, this is where a lot of athletes start their competition experience.

Please find the link for all of yesterdays results on the Yate Athletics Club Website.

Three of our athletes were invited to the BIGs last weekend which is a great achievement in itself!

Jacob Spence has been in great form over the last two weekends with new PBs which would have put him well up the field, but we believe he pulled up in the 110mh so are awaiting news, we wish him a speedy return whilst congratulations to Beth and Adam.

The attached list shows all those who attained a grade for their performance at Braunton last weekend.

Certificates can be collected at the track from Pat Jefferies on Thursdays when she is doing the tuck shop. She will try to get them to those who do not come on Thursdays some other way.

Excellent performance from you all, especially those in their first competition, Well done.