For the team managers Leslie Nunn (girls) and Darren Wells (boys) it’s been a struggle to get a full team, as it fell on schools half term break. but what a team they produced. The athletes that competed covered disciplines that were miles outside of their comfort zones. But all with a smile on their faces (thank you).

With travelling by coach for a couple of hours to get to the event, we stepped off the coach to be greeted by fantastic sunshine. Thanks North Devon for booking brilliant weather. What a lovely venue and Club to greet us. Their clubhouse was put under pressure by catering for all but what a gallant effort. 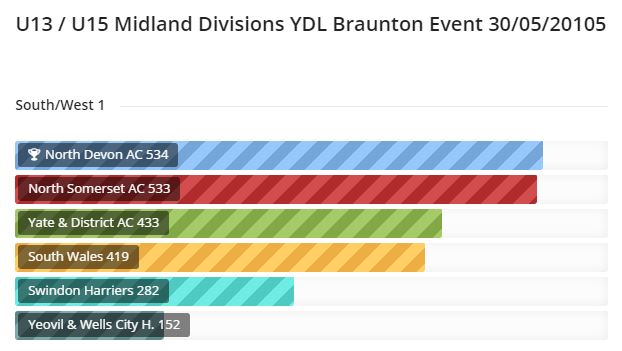 It was nice to see a selection of our coaching team at the event to help support their athletes through the events. We all checked in on time so well done, (that doesn’t always happen).

Quite a few of our athletes set new PB’s some by a long way (Liam Hillier). What  great achievements!

After a full on day we then got back on the coach for our trip home, Most had a good sleep to recharge their batteries. Some dad’s even had a good snoring session! Its ok we aren’t going to name and shame them.

Don’t forget the next YDL competition will be on Sunday 21st June at Home!!! (Yate)

Mark Lodge is organising a sprints medal competition at Yate on 07/06/15. This is specifically for the younger athlete to give them competition experience in a fun environment! For ages 12 and below the first race is at 11.30 with 30m for the really young up to 300m for the older athletes. Medals will be awarded on the day!

Please see the attached details and entry form  and look at the events you want to do.

This was a great fun and a tremendous success  last year, so make sure you get on down and don’t miss it!

The second round of the LAG (U13/U15) league competition takes place tomorrow at Braunton. The team have an early start by coach for the trip down, but the weather seems set to remain fine for the day. We wish all the athletes best of luck for a good days competition and performances.

We also wish good luck to Adam Wilson, who after selection, will be competing at the Bedford International Games in the Para Elite 1500m race on the 31st May 2015.

The selection sheets for the YDL U13 and U15 teams are currently being distributed for the away match at Braunton.

Please confirm you can compete as soon as possible to Lesley & Darren. We need a full team next week to ensure our highest place possible, we are chasing promotion to the South West Premier League this year so every point counts!

Please also take advantage of the Coach that the club arranges, the cost is only £5 each but only up to £10 maximum, so it is really good value, especially on a trip like this. The athletes all have a great time and the parents get to sleep, read or chat with out the hassle of driving and kids moaning ‘are we there yet’!? Coach Pick ups are at Yate (back of swimming pool) 07.15 hrs and Air Ballon Pub at 07.30hrs drop offs at the same places.

Please find a link button on the homepage of our site to a PDF of today’s results.

Please accept my apology for the slow publication of today’s results, we are making every effort to get these to you all as soon as possible.
We also hope to have an event report with pictures and insights to every event Yate Athletic Club are competing at, for more information please contact Jeremy Dale.

If you know of anyone that isn’t receiving these emails please forward this email (link) so they may subscribe.

PS If you have any ideas or suggestions for the club please drop us an email to contact@bstech.co.uk

I’ve been recently asked about classification and what the different numbers mean by one of our coaches. With this in mind I’m taking this opportunity to tell you what the classification process was for me.

For a disabled athlete to compete they need to go through classification. This is where they will get assessed and be given that all important number. I had mine in Bath. For me I turned up and met with a sports medic and 2 classifiers, the medic checked my notes and checked that I did have Cerebral Palsy. They asked me questions on my disability and how it affected me, mobility checks were made to see how much movement I could do and what I struggled doing. If you’ve ever had an injury it’s like going to the Physio!! We then moved onto the track, a place I love and they asked me to run about 50 metres and to sprint and stop as quick as I could. Once I did the exercises asked of me they had a private discussion and told me I was a T37. Once you have your classification it is unlikely to change, however they ask you to compete in 2 races in the same season the senior classifiers will watch you to see that they have placed you in the right classification. Normally it is about 4-6 weeks after your initial classification is done.  This is to ensure that people perform the same way in both the initial and competition meetings. A few days after you compete, you normally receive an e-mail to confirm your number. Please be aware that although the process for classification is the same the tests given to wheelchair athletes or athletes with other disabilities can vary. If you want to know more please ask me or the other disabled athletes we have at the club!! Just make sure it’s before or after training, we don’t want to be distracted now do we!!

A few of you might be wondering what do all the numbers mean and what makes a person a T37 or T45. I do hope the link below will be of help. After all by Rio 2016 I hope to have educated you enough so that you can watch the Paralympics as complete armchair pundits, impressing your family and friends!!

Anyhow I best sign off, I have some training I need to get into!! No rest for the wicked hey!! Have a great week!!

Remember to stay on the right track looking forward to the goal ahead!!

The provisional results are now on the AT&FL web site (these can be accessed through our website). We have started the season well, just being pipped into second place by Team Bath but it was close, with a bit of luck we could have come first! There was a real buzz about YOSC on Sunday and despite the chilly weather and head wind down the back straight there were some good performances. This was a really good ‘TEAM’ effort though, from our officials, (we loose points if we do not have enough), team managers, parents and athletes. What was outstanding on Sunday was the extra efforts being made, from Athletes who are starting their exams today, being so focused they did an event then went back to revising in a quiet spot somewhere, those senior athletes turning up in force to form the largest senior team for some time, to those who competed up an age or in an event they would definitely not claim is their favourite, not forgetting to mention those who competed for the first time!

The quad kids team also played their part with new athletes representing the club for the first time, despite two disappointed athletes, ill on the day, there were still some great performances, with Adam winning every event he was in, but again a ‘TEAM’ effort story similar to the older teams, great performances, (even in non preferred events) parental support, team manages and officials all doing their bit.

Thank you to every one who played their part, good luck with your exams over the coming weeks, and hope you are not to sore today for those that did something out of their usual comfort zone!!!

Entries for the Avon Championships (to be held at Yate on 17/05/15) close on the 10/05/15, so for those of you who want to compete, get your entry in now! Don’t forget the UAG YDL is in Cardiff the day before so bear that in mind. LAG athletes have no excuses!

On another item congratulations to Adam Wilson who has been selected to compete at the Bedford International Games in the Para Elite 1500m race on the 31st May 2015. Well done to Adam who is having a great year and it’s only May!

Just a Reminder the first Avon Track and Field League event is on Sunday at Yate, if you are competing get there in time to sign on, pin your numbers on and do a proper warm up (allow an hour before your first event), if notcompeting come along and support your club and fellow athletes.