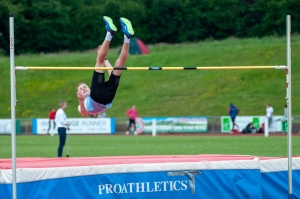 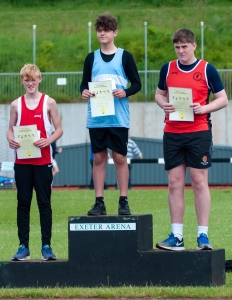 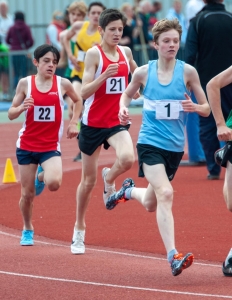 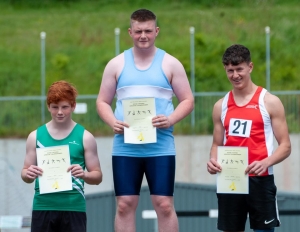 The South West Schools Championships is the highlight of the season for many young athletes – especially those who are selected for their county for the first time or for those not quite good enough for the ultimate – English Schools, writes Stuart Nunn.

Eight Yate & District athletes competed in the junior girls and boys age groups. All but one of them finished in the top three positions.

There was a win for Luke Ball in the high jump, achieving a “National Standard” with a jump of 1.93m.  This new Personal Best and Club Record is an outstanding achievement that puts him in eleventh position on the UK U15 All-time ranking list.

The other winners were Matthew Page in the boys hammer, with 32.48m; Theo Spurrell, competing for Wiltshire, in the javelin, throwing 46.60m, and for Adam Nolan in the pole vault. Theo’s throw qualified him for English Schools.

Seamus Robinson put up a tremendous effort in the 1500m. At 100m from home the race looked lost, but he put in a burst of speed and managed to finish in second place. His time of 4:19.94 secs was extremely creditable for a junior. Also second was Grace Horswell in the pole vault. Naomi Dawson was third in the 75m hurdles.

There was more success in the older age groups too. Daniel Brooks had a remarkable day, winning both 100m and 200m. His times in both were new personal bests and of a “National Standard” quality: 10.71 secs in the 100m and 21.63 secs in the 200m. If he can reproduce that form at English Schools, who knows what he might achieve. In both races he was ably supported by Isaac Cory, who also gained new personal best times but had to be content with third places.

The hammer has become a real speciality of the club. Toby Conibear beat his Cornish rival with a new personal best of 63.60m, which was also a championship best performance.  This performance also put Toby in 51st position on the UK U17 All-time rankings, just 6cm ahead of his coach, Matt Spicer.  Throwing for Wiltshire, Owen Merrett threw 51.91m for third place and James Viner came fourth, smashing the 50m barrier for the first time, with a new PB of 51.31m.

In total, thirty Yate athletes represented their counties – Avon, Wiltshire or Gloucestershire – at these championships, surely a record that few clubs in the south west could match.