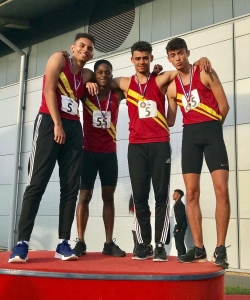 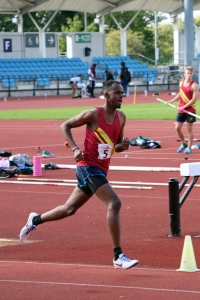 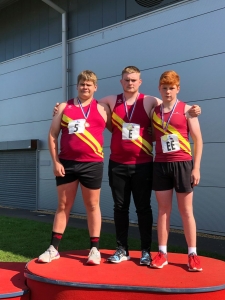 Having beaten the Welsh teams at the Regional Final, “Team Avon” set off for Manchester for the climax of the YDL season, to face the best of the English and Scottish teams in the National Final.

Although the day was a long one the weather was kind. Although there were some key athletes missing, either through injury or private school commitments, Yate and District was still the biggest contributor to the team. “Team Avon” came home with 51 medals of which 23 were claimed by Yate and District athletes.

Dan Brooks, in his last competition for “Team Avon”, excelled himself winning Gold in both the U20’s 100m and 200m, beating athletes from Birchfield Harriers and Blackheath & Bromley, who are both ranked higher than him on the Power of 10. The work he had put in on his finish had paid off as both races were very close.

The throwing trio of Toby Conibear, Owen Merrett and James Viner also had an excellent day. Toby and Owen did their usual double in the Hammer both winning Gold. James, although a bottom age group U17 stepped up to U20’s and using the heavier weight still managed to achieve a Bronze in the A string. All three of them went on to win more medals, amassing 7 between them.

Abdi Hasan showed his strength in an excellent race by winning Gold in the U20s 3000m and then, two hours later, achieving a Silver in the U20’s 800m.

The 5th A string Gold medal was won by Hannah Lewis in the U17 PV with a jump just short of her pb. Despite not feeling 100%, the huge smile never left her face.

The last race, U20s 4 x 400m, of the a very long day brought the biggest cheer from Team Avon. Dan Brooks, in what was his first 400m took over as the 4th runner in 5th place. He attacked it like it was a 200m eating up the ground between him and the athletes ahead of him and crossed the line in Bronze medal position. The cheer that went up was a fantastic end to a what had been a very good day.

When the final scores were read out Team Avon had finished in 3rd place behind the 2 big London Clubs Blackheath & Bromley and Shaftesbury Barnet.

A big thank you must go to the officials that gave up their weekend to enable the team to fulfil its Officiating duties, Matt Lewis (Y), Mike Smerdon (Y), Pete Davenport (B&W), Hilary Nash (B&W) Ian Humphries (M), Andy Rumney (M) and Kevin Dibble (M). Also a big thank you To Julie Alexander, Sam Smith and the all the parents that drove athletes up to Manchester ready for the 10.15 am start.