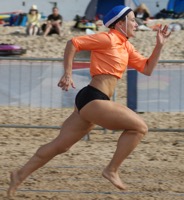 A talented young athlete, Charnia switched from athletics at University where she was talent spotted for the British Skeleton Bobsleigh team.

At 25 Charnia decided to return to Athletics and joined the club with the Sprints and Hurdles group of Graham Howell.

In her first season Charnia topped the club rankings over 100m and produced some useful hurdles times. In addition to track achievements Charnia also tried Beach Surf Life Saving competition (picture) and was selected for the British team after coming second in the British Championships.

A number of National team selections followed with trips to Australia, Japan, South Africa and Germany and British titles in Flags and Sprint .

In 2008 Charnia concentrated on her short sprints and again topped the club rankings with a 12.13s.

In the 2008/09 Indoor season Charnia made the UK Trials semi-final over 60m in Sheffield and improved the club record.