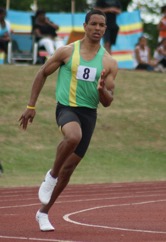 An enthusiastic young athlete who made rapid progress in his first year of sprint competition with coach Graham Howell.

His second season saw rewards for his hard work. A bronze medal at Midlands Indoor 60m and bronze at Midlands outdoor 100m, plus representative selection for Avon Schools in the English Schools Champs and South West region at the Inaugural Schools Games in Glasgow.

In 2007 Jamie again made good progress in the sprints breaking through to sub 11 second territory and English schools selection again.

In 2008 Jamie made the 100m English Schools Final and again showed improved times in both short sprints.

Jamie loyally kept turning out for Yate until 2017, recording  very low 11-second 100m times and even pushing the Shot Put out to very respectable 10m+ distances