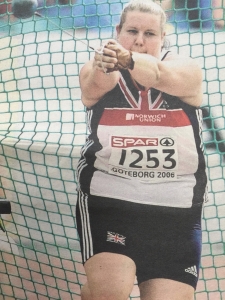 Zoe came to the club at age 14 to keep her friend Joanna Thorn company and decided to have a go at some throwing.  She found she liked it and began throwing some decent distances with the discus.

Zoe left the club in 1999 for opportunities of better competition. A brief spell with Bristol AC was followed by a move to Birchfield Harriers and coaching input from British International Lorraine Shaw.

In 2002 Zoe competed for England in the Manchester Commonwealth Games, the start of a number of National team selections.

In 2008 she competed for Great Britain at the Beijing Olympics.

A Bronze medal at the 2010 Delhi Commonwealth Games representing England was a further achievement and recognition for Zoe.