Alan had one brief season in 1997 with the club, during which he broke club records in Pole Vault and Javelin and took the Midland Counties Senior Mens Javelin Title

He then returned nine years later, in 2006, with his children (Seth, Florrie and Jess) where he set some more (Masters) records. 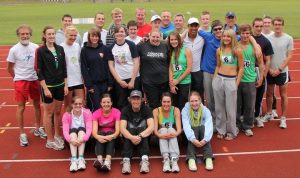